“You cannot go around saying to people that there’s a hundred percent chance that they’re gonna die,” replies the US President to two bewildered astronomers who have just announced an impending planetary catastrophe. This scene, set in an Oval Office occupied by a Trumpesque Meryl Streep, ignites the dilemma underlying Don’t Look Up (2021). In Adam McKay’s latest sci-fi satire, astronomy professor Dr. Randall Mindy (Leonardo DiCaprio) and doctoral candidate Kate Dibiasky (Jennifer Lawrence) discover that a giant comet is on a collision course with Earth. The impact, due in six months, will provoke a mass extinction event, obliterating all humans on the planet. Thus, the two scientists and a NASA officer (Rob Morgan) embark on a grotesque odyssey to save the world. Unfortunately, their endeavour doesn’t go as smoothly as could be legitimately expected in similar circumstances. Through its not-so-subtle metaphor of climate change, Don’t Look Up provides a farcical representation of humanity’s ineptitude in the face of existential threats.

What dragged me out of the proverbial rock I happily live under when it comes to the hottest Netflix releases was the promise of a truly apocalyptic story. From the beginning, Don’t Look Up makes it clear that we will see no miraculous resolution, no poetic sequence showing humanity coming together and saving the day by means of its ingenuity. On the contrary, I soon felt exasperated enough to start rooting for the comet, anticipating the collision as a kind of sour catharsis. However, I didn’t see the film as a self-satisfied bashing of “the others” – those who, unlike us savvy viewers, can’t or won’t see the danger both on and offscreen – as some critics slammed it for. Don’t Look Up’s satire doesn’t point at dumb citizens, but rather at corrupt power. Disingenuous institutional neglect, the vanity of the media, and corporate interests represent the true barriers between the dire reality and common people’s understanding. At the same time, whoever felt intelligent while watching Don’t Look Up should probably review their priorities. The only emotion the film left me with, other than rage, was a tragic sense of despair.

Living under the climate crisis, especially as a young person, is uncanny. Here we are, striving to get good grades or build up our CV, trying to build our future through personal branding. We like inspirational posts on LinkedIn and write our own, using that professional yet engaging tone that makes us desirable, just like commodities. We even stuff our free time into this vortex of performative productivity. Our photos on social media are testimonies of our full, aesthetic and thrilling life. In the meantime, the future we are hoping to build is irremediably compromised. Most national governments acknowledged the existence of a climate crisis, at least in principle, by signing the Paris Agreement back in 2015. We are now in what McKay’s film represents as the “Just Look Up” phase: we can see the first effects of global warming; we can see the comet in the sky. But we aren’t responding with the required urgency to the looming threat.

These six years of formal international cooperation on climate change were marked by spectacular failures. The much-anticipated COP26, held last autumn in Glasgow, ended with no commitments to keep global warming below the recommended threshold of 1.5°C by the middle of the century. Every year we receive scientific reports of record temperatures and extreme weather events with no more than a snarky comment on our social media. Many, especially very young people, keep protesting and raising their voices to remind governments of the risks of high carbon emissions for the planet’s ecology. But overall, one can’t perceive a sense of panic akin to our house being on fire, as Swedish activist Greta Thunberg urged in a famous statement at the 2019 World Economic Forum. As Jonathan Safran Foer stresses in We Are the Weather (2019), the calamities provoked by climate change aren’t taken too seriously because they “feel abstract, distant, and isolated, rather than like beams of an ever-strengthening narrative.”

I believe people deserve to know that there’s a hundred percent chance they’re going to suffer, especially if they can still do something about it. This is precisely the case now, as we need to avert the worst-case scenarios of the climate emergency. The climate crisis may not have an impact as devastating as a giant comet, but it will be a slow agony. It likely won’t cause humanity to go extinct, but it will provoke up to 250,000 more deaths every year due to health issues linked to deteriorating environmental conditions. It will cause entire ecosystems to collapse, and consequently the extinction of several animal species. Moreover, scarce resources and mass displacement will fuel tensions among and within nations, leading to instability and violence. It’s too late to nullify some of these effects, but it’s also vital to avoid the most extreme of them.

Recently, a person close to me reassured me that climate change effects will be a problem for my children or grandchildren to live with, not for me. First, this is simply not true. The crisis is already affecting millions, and if nothing changes our beautiful planet will be unrecognisable long before the end of the century. Secondly, this is precisely the malicious attitude of neglect for future generations that institutions have promoted for decades. It’ll eventually lead us to the brink of collapse. Now is the time to get anxious and angry, if we don’t want to feel desperate later. 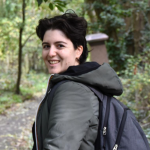