Surprisingly, when the age range is opened up to 18-65 years old, the statistics remain very similar. In a survey of 3,000 single men and women in the US, women said they orgasm 63% of the time, and men 85% of the time. Even though 75% of women don’t orgasm from penetrative sex, culturally we prioritise PIV, and the orgasm that comes from it. In fact, about 3-10% of women reliably orgasm from PIV alone. In fact, 10-15% of women struggle to orgasm at all.

Interestingly, lesbians have a significantly higher rate of orgasms than heterosexual women. And, for men the orgasm rate doesn’t vary with sexual orientation. This perhaps suggests that the penis is the reason for the orgasm gap, not women’s inherent inability to orgasm.

In part, the lack of education is contributing to the orgasm gap. In a YouGov poll, 59% of men and 45% of women could not accurately label a vagina. Whatsmore, current sex education doesn’t focus on pleasure, nor does it promote communication with sexual partners.

Although it’s a notoriously accepted social fiction that men don’t know where the clitoris is, more than clitoral stimulation is seen as foreplay when really, it’s the main event for most women. As such, a step to closing the orgasm gap would be to have everyone hold clitoral stimulation and penetration in equal regard.

Whatever the cause it’s undeniable that the orgasm exists, and that there needs to be some kind of conscious cultural shift. 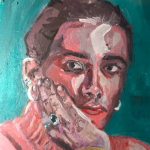