DISCLAIMER: I want to say that I still have bad days like everyone else. If you are struggling with mental health in any way, please do not use this as a guide, instead seek mental health services – we all need a helping hand sometimes.

When you think of a minor learning difficulty, often the issues that spring to mind are those to do with education and work, which are, of course important issues. But what about a person’s mental health, or the social impact on their lives?

Dyspraxia is a brain-based motor disorder that affects a person’s coordination, meaning that writing, sports and concentration can be difficult. I think people with any minor learning difficulty have either a fierce reluctance to accept societal labels or having been so suppressed, they have a sad acceptance of their situation. I was often dismissed from an early age due to my Dyspraxia and Dyslexia, being put into behavioural classes even though I had no signs of bad behaviour. Bullying, insecurity, and embarrassment left me at 16, feeling lost about where I fitted in.

I went and worked at a carpentry workshop during my first summer after I left school. I still remember my boss’s face being red with anger because he couldn’t understand how I kept forgetting the stages to make a component. I would clumsily try my best, but in the end, I admitted it to him. I felt this great shame about the whole thing. The words I wish I was told were “Rome wasn’t built in a day“, because now these words mean so much to me.

I never quite knew my place; I tended to avoid sport or even drinking games like beer pong out of insecurity. I used to attend Muay Thai classes and deliberately turn up late; I would sit in the car, anxiety glueing me to my seat. Though, I was actually quite good at Muay Thai when I could concentrate. I would definitely suggest martial arts to anyone who needs a confidence boost. It is a good crowd of people who want you to succeed as much as they want to beat the hell out of you. Fighting has that adrenalin kick, and everyone starts at the same level; respect is earned and not given. When you are in the ring, you are alone, you only have yourself to rely on, and that ring is where you find your courage.

One day, I was doing pad work with one of the women who had just joined, showing her how to angle a punch and so on. When you are new to pad work, it is hard not to flinch as a leg, elbow, knee, or fist comes flying towards your face. So, this woman held a pad, and as I twisted my foot to add force behind my punch, I hit her square in the face. I found out later on that it was my sisters’ boss at the time. Ah, the clumsy guy strikes again.

I was often treated like I was not good for anything – which by the way, is never true. My fierce reluctance often kept me pushing myself against people’s negative expectations of me. This led me to hardly tell anyone that I had these impairments. This was a matter of principle for me; firstly, I was fiercely independent. Secondly, I did not want to be doubted.

We all need a positive role model, yet the action heroes and boxers I admired were just unrealistic. I needed someone I could relate to. That’s when I stumbled on an article by Henry Rollins on weight lifting. He speaks about his progress from a clumsy bullied kid to a self-confident man. The opening sentence hooked me, and I remember stopping and taking in these words: “I believe that the definition of definition is reinvention. To not be like your parents. To not be like your friends. To be yourself.”

That is when I got into fitness, seriously. I would run the most challenging route I could find. I found an uphill slog, and that summer, I ran it every day, sweating and grunting but embracing the challenge.  I would work out every other day, lifting really lightweight and increasing, trying not to lift my ego but my arms. The progress was like the hill I climbed, of course, slow, but the mental benefits and life skills I developed up that hill every day were invaluable. Triumph is pushing yourself further than the previous day, and failure was never considered.

Reinvention is an essential step in overcoming that insecurity. Weightlifting is perfect for someone who is dyspraxic, especially if you are insecure (like I was and still can be at times!). The movements are simple, and the goal is more accessible than most sports. As Rollins says, “The Iron never lies to you.” And those are some honest words. When I came to meet that hill every day or come in from a long day and have to work out, it is bluntly facing you. There is no way around it. When you pick up that weight or go for that run, you are not only physically accepting the challenge, but you are also agreeing to improve yourself.

I took control of my dyspraxia by reinventing my self-image. By empowering yourself, it takes the power away from those who have previously dismissed you, and puts it back into your hands. The incredible thing is anyone can do it – even if you are clumsy like I am. And nobody can take that achievement away from you. 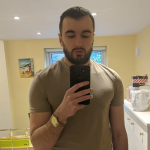