Despite all of the cancellations and postponements in the 2020 cycling calendar, it turned out to be one of the most exciting seasons to date. Young talents rose to the front of the peloton, grand tours and one day races had some of their closest all-time finishes, and races were fought fiercely as there was no certainty over any race reaching its final stage (without having to be abandoned).

It became a strange season with a year’s schedule condensed into a few months of racing. Reduced crowds on the roadside made it impossible to ignore the impact of coronavirus, and hot summer weather posed an additional challenge for races that would normally be a chilly Spring classic. It was bizarre – but brilliant, and now that the 2021 season is safely underway, 2020 is certainly a season worth revisiting.

The UAE tour of 2020 was one of the first big races hit by the pandemic. This was a race showcasing a lot of talent. Chris Froome was fighting his way to recovery, Tadej Pogačar was continuing to display his form from the 2019 Vuelta a España, and there was a great showing of sprinting talent from the likes of Caleb Ewan and Pascal Ackerman. This race seemed to have it all, but after only five of the seven stages had been completed and several positive covid tests had been confirmed, the organisers took the decision to abandon the race. This left Brit, Adam Yates, as the victor having taken the race lead on stage three and everyone was left to wonder what would happen next.

What followed next were the quiet months. Race after race was cancelled or postponed and there were growing doubts over whether or not the three biggest races in the cycling year: the grand tours of Italy, France and Spain, could even go ahead. Eventually a reorganised schedule was published by the UCI, the governing body of professional cycling, but when the season started up again in August, it didn’t feel as though it was the same one that had been abandoned months before.

There were new questions of the riders. The crammed schedule meant that teams had to prioritise specific races more than ever before to avoid fatigue destroying their chances of success, and there was also the question of how much training each rider had been able to do during lockdown. Depending on where they were living during the pandemic, riders had been afforded different levels of freedom during their time off, some unable to leave the house to train at all while others had been free to roam the roads and build race strength in a more natural setting. These questions though, only added to the drama and set up for a great season of racing.

The action began straight away when the season resumed. The Tour of Poland became a major spectacle for cycling fans – but for the worst reasons. Fabio Jakobsen suffered a horror crash when Dylan Groenewegen forced him into the barriers in a sprint finish on the first stage. There were calls for Groenewegen to be banned from the pro peloton as a result of the horrific crash which left Jakobsen needing reconstructive surgery on his jaw, but eventually, the UCI did issue a nine month ban.

Soon after, Remco Evenepoel, a young Belgian talent, was seen tumbling off the side of a bridge in the Italian one day race Il Lombardia and, in that same race, Max Schachmann suffered the bizarre fate of colliding with a car that had somehow ended up on the course.

It might seem that it was destined just to be a season of crashes but it felt as though these early incidents occurred while the riders were getting months of adrenaline and anticipation out of their systems. Soon the excitement turned back to the performances on the bike and there was some spectacular talent on display.

The grand tours, the Tour de France, the Giro d’Italia and the Vuelta a España, are races which last three weeks (normally 21 stages with 2 rest days). These are the biggest events in the cycling year and in 2020, each of them were won by less than a minute!

In the Tour de France, Primož Roglič and his Jumbo Visma team seem to be confirming everyone’s suspicions that they were the dominant force at the race. Tadej Pogačar (at the mere age of 21) was the only man to even question Roglič’s authority, but even he couldn’t shake him in the mountains. Though, the penultimate stage’s time trial was quite a different story. In a stunning performance, Pogačar took back 1 minute 56 seconds on Roglič to win the race overall by 59 seconds; claiming the titles of ‘best young rider’ and ‘king of the mountains’ in the process.

It seemed like it would be a race difficult to top but then came the Giro d’Italia. This saw two of the big contenders, Simon Yates and Steven Kruijswijk, forced to withdraw after positive covid tests, leaving the opportunity for another young rider, the 22 year old João Almeida, to take the early lead. Almeida held onto his lead for an impressive fifteen day period but in the end, Tao Geogenhart and Jai Hindley, proved themselves to be the strongest of the bunch. After battles in the mountains, they went into the final stage’s time trial on exactly the same time to set up a thrilling finale. Geogenhart asserted his dominance in the time trial and took the final victory with only a 39 second advantage – 20 seconds less than the Tour de France’s winning margin.

Then the Vuelta a España which, in the crazy schedule of the covid calendar, overlapped with the Giro d’Italia headed towards its conclusion in similarly dramatic fashion. By this time there were growing concerns that the pandemic may make a return and end the race prematurely but the riders carried on as they had to. Roglič was keen to make up for his collapse in the Tour de France and proved again to be a strong climber, but Ineos had shown up with a team which seemed equal to the challenge. Richard Carapaz made it look as if there may yet be a race on for Roglič but eventually, he had to concede to Roglič’s ability and accept defeat only 24 seconds behind the Slovenian.

The grand tours were spectacular. They each had worthy winners along with impressive performances from other members of the teams. Marc Hirschi and his Sunweb teammates won several stages with tactical masterclasses in the Tour de France, while Sam Bennet announced himself as the dominant sprinter in the pack. Wout van Aert proved he could take up any role on the road and still put in an impressive performance; carrying on the recent trend of cyclocross riders turning their attention and exceptional bike handling skills to the road, and becoming forces to be reckoned with.

There was controversy too in the grand tours. Team EF pro cycling suffered serious fines in the Giro for their unorthodox kits in collaboration with Palace; featuring a duck’s head as the design for their aerodynamic time trial helmets. Chris Froome was most prominent in a group of riders to refuse to start the race in what they considered to be unsafe conditions; given the heavy rain and the fact that it was one of the longest stages of the race, straight on the back of a tough mountain stage the day before. And Roglič almost had another embarrassing moment when his Vuelta chances came under threat as he struggled to put on a rain jacket in high winds.

The One Day Classics

Beyond the grand tours, there was still a lot to enjoy in 2020. The world championships took to the roads of Italy and saw Anna van der Breggen taking the women’s title ahead of the reigning champion, Annemeik van Vleuten, who rode with a cast on her broken wrist from a crash the week before. Meanwhile, Julian Alaphilipe took the men’s in an emotional victory for one of the biggest characters in the pro peloton.

What didn’t go so well for Alaphilipe was his first attempt to win a race after his World Championship success. At Liège-Bastogne-Liège, he was confident he had won but celebrated too soon and Roglič was able to steal the win with a final second lunge for the line. He had better luck a few days later, winning Brabantse Pijl (but only just) ahead of Mathieu van der Poel, another of the cyclocross stars who has recently turned his attention to the roads. Van der Poel found his own success though soon after at the Tour of Flanders in which he beat Wout van Aert to the line by the width of a tyre.

It was a season of highs and lows – and the unpredictable in between. It gave us the names to look out for in 2021 and the first hints of rivalries that will rage on for a long time. In a way, the season felt like it reset the cycling world and there is something of a new eagerness in the peloton for riders to attack and race more aggressively than ever before. I can’t wait for the season ahead and hope perhaps, if you’ve made it to the end of this article, you might think about checking out bike racing too. 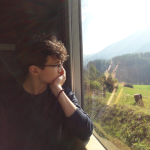