When Jonathon Safran Foer released his debut novel Everything Is Illuminated back in 2002, he couldn’t have anticipated it receiving the extensive critical acclaim that it still inspires to this day. Though the book was published when Safran Foer was 25 years old, he finished writing it when he was just 23, later claiming that he attempted to “write the book [he] would want to read”.

Everything Is Illuminated is based off of a real trip to Ukraine that Safran Foer took when he was 20, motivated by a photograph of a woman believed to have saved his grandfather from the Nazis. Although the trip was ultimately unsuccessful, Safran Foer emerged with 280 pages of pure literary genius that earnt accolades such as New York Times Bestseller, Guardian First Book Award and National Jewish Book Award for Fiction, to name a few.

In recent years few debut writers have achieved the same initial impact as Safran Foer. Whilst Everything Is Illuminated definitely isn’t a perfect novel, its mixed reception was overwhelmed with recognition of its intriguing premise and Safran Foer’s outstanding storytelling.

When first reading the book, it’s surprising how comedic Safran Foer’s commentary is. The plot follows several narrative threads, looking to both the past and present in its exploration of Jewish culture, history and identity. It begins with Alex, Jonathon’s Ukrainian translator throughout the story, sending letters reminiscing about the trip. He writes in the intentionally hilarious faulty English of someone who taught themselves the language with the assistance of a poorly written dictionary. As he is sending Jonathon these letters, Jonathon is simultaneously posting him chapters of the novel he is writing about his discoveries in the town of Trachimbrod.

Though the story recognises the distressing aspects of Jewish history, it is also incredibly amusing at various stages. If Everything Is Illuminated were written by any other author, this could result in a jarring or uncomfortable reading experience. However, Safran Foer artfully incorporates his dry wit to make this unique sense of humour and bemusement flow across the page. Perhaps this ability was due to his youth at the time of writing the book, with no expectations just a story he knew was worth writing.

Following the publication of Everything Is Illuminated, Safran Foer witnessed the production of a poorly made 2005 film adaptation starring Elijah Wood alongside the release of his second novel Extremely Loud and Incredibly Close. This second book received practically equal critical acclaim but arguably failed to capture the almost surreal voice Safran Foer achieved in his debut work.

Everything Is Illuminated encapsulated the liminality of writing from a place of personal experience, most apparent through the central protagonist being ironically also named Jonathon Safran Foer. The title incorporates these ambiguities, simultaneously portraying the continued significance of history on the present whilst delving into Safran Foer’s own position as a writer reflecting on this entangled relationship.

In an interview with the Guardian just after the release of Everything Is Illuminated, Safran Foer asserted that he had never really been that interested in writing. Unlike his contemporaries, he claimed not to have grown up engrossed in reading and books, and this is what arguably makes his writing feel so genuine and authentic. It doesn’t have the intention of being pretentious or impressive, but instead encapsulates raw human emotion that can stir laughter or tears from any reader.

As opposed to the traditional view that wisdom comes with age, Safran Foer’s writing proves that timeless literary masterpieces such as Everything Is Illuminated can be most profound when originating from young peoples’ experiences and those of their predecessors.

It seems fitting to end this article with one of the most impactful and enduring quotes from the novel. One of the book’s characters contemplates how “infinite pasts and infinite futures washed over him as he waited, paralyzed, in the present”. It’s here that Safran Foer demonstrates his genius, perfectly capturing the universal desire to understand one’s place in history. It’s easy to forget that he wrote these lines as a young adult working as a receptionist for a PR firm, unaware of his literary potential. 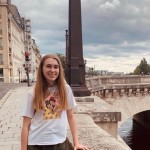