The rise of smartphones is one of the most defining features of the 21st century. It is an astonishing feat of humankind – they have transformed our day-to-day lives on a global scale. Yet, the days of being in awe at the latest iPhone are long gone, and there is a much more sinister side to our use of smartphones that is now being exposed. As a species, we have become addicted, and there is a peculiar lack of urgency to do anything about it.

A study by the Washington Post reveals that teens average over 7 hours of screen-time per day, which is a staggering figure. The level of addiction will naturally differ from person to person, but the point remains that a large majority of users will not leave the house without their smartphone, checking it numerous times from dawn to dusk. Make no mistake though, the blame does not lie with the user – our society has instilled in us a dependence on these devices. We continue to be told that we need a phone to carry our train tickets, to stay in touch, and to find our way home; social media is designed to be addictive; an economically driven society is bound to convince us that we cannot cope without a smartphone. Having been without a smartphone for 7 months, I can assure you that this is myth, but regardless, these societal changes leave many with an inevitable feeling of reliance.

The word ‘addiction’ may seem strong, but only an observant walk in any public place is enough to show how out of control the situation is. Smartphones are everywhere. We would rather be on our device than talk to the person with us; a free moment is an excuse to check some messages; we hold our phones in our hands for no particular reason other than habit. From a certain angle, it is something of a dystopia.

It is fairly well established that smartphones (and social media in particular) have a big part to play in the younger generation’s mental health crisis. We are now bringing up children in the virtual world of Instagram, where everyone and everything is glamourised. These apps encourage us to put filters on our photos, which is to quite literally pretend that things are better than they really are. It is no shock that this is damaging to self-esteem. Our mental states are only influenced by what we input into our mind and body, and given how often we absorb the toxicity of social media, the detrimental effects that smartphone addiction has on our mental health comes as little surprise.

Smartphone overuse is also making us somewhat impatient. Phones are now designed to momentarily fulfil our desires, so once we take this away we are bound to be left with the overwhelming feeling that something is missing. Just like taking a cigarette away from a smoker. We tend to think of our smartphones as an escape from boredom, but by causing this agitation, they in fact make us more susceptible to boredom in the long-term. The serious implication of this is that smartphones are dangerously raising our thresholds for satisfaction. The older generations, having had far less constant exposure to smartphones, are remarkably good at being content with just sitting down, doing nothing in particular, and just appreciating their surroundings. For much of the current youth, this is a difficult task. The instant and constant escape from ourselves that our smartphones offer is disguising the fact that the most rewarding aspects of life require patience. Our screen-time is stifling the simple wonders of life.

In light of the issues, it is quite remarkable that there is no global urgency to help smartphone addiction. Smartphones are so widespread and the addiction so normalised, that the ‘addicts’ do not even stand out. In cultures where non-smokers are few and far between, smoking addictions are often not dealt with appropriate concern, and a similar thing is happening in the case of smartphones. We may know full well how harmful they can be, but because almost everyone has one, the problem just does not seem as important as it really is. The worrying thing is that the normalisation does not magically make the issues disappear, it just results in a lack of proper action.

When will therapists start regularly recommending a break from social media? When will we stop joking about excessive screen-times? When will age-restrictions be put on apps and smartphones themselves? When will social media giants start taking some responsibility for the mental health crisis? The problem is now almost universal and serious steps must be taken, but while the corporate giants are still making money, it is predictable that the issues are being criminally overlooked.

Since most of us aren’t in contact with Mark Zuckerberg and co, it is still worth thinking about what we can do to reclaim freedom from our smartphones. As with any addiction, the problem isn’t the phone itself, it is using it in excess. I think an important distinction should be made between active use and mindless use. When you unlock your phone with a particular purpose in mind, such as to message a friend, to Google something, or to call an Uber, you are actively using your phone. These uses are relatively unproblematic. It seems reasonable to draw the line of addiction at when one finds themselves opening their smartphone with no particular intention in mind, but rather mindlessly – purely out of habit. The next time you instinctively reach for your pocket, it is a very good practice to ask yourself why. Boredom appears to be the typical cue for a mindless scroll, so when you find yourself standing in a queue or sitting on a bus, try to remember that all you need to do is breathe and be present in the real world. 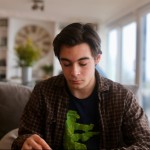 Born in 2000, raised in London, and now studying philosophy at Bristol University. I consider myself to be calm, meditative, easy-going and often found deep in thought about all sorts of things. My writing is a way for me to put these thoughts into words.