Trigger warning: this article contains references to acts of sexual violence and harassment.

Two out of three girls in the UK have been sexually harassed in public. Isn’t that statistic concerning to you? That nearly every girl in this country experiences Public Sexual Harassment, and somehow, it’s not a criminal offence – in fact, it’s barely acknowledged. The law is tough on those who are caught dropping litter in public, with a maximum penalty as high as £2,500, yet there are no consequences for harassing a school girl in public. What message does this give off?

The normalisation of Public Sexual Harassment is part of a wider problem in our society concerning violence against women; it shapes our experiences growing up from girls into teenagers, and teenagers into women, and follows us around until we’re too old to warrant harassment from men – and I’ll call it for what it is, because it’s not simply “attention”, it is harassment and it’s a consequence of gender inequality.

Public Sexual Harassment comprises unwelcomed and unwanted attention, sexual advances and intimidating behaviour that occurs in public spaces. For something that’s shrugged off as being so “normal”, I feel it’s important to unpack Public Sexual Harassment and understand how it changes the way we move in public spaces as women. I want you to try and reverse the roles. Picture this: you’re driving with a car full of girl friends and you clock a good looking boy walking on the path ahead, he’s alone, so you wind down the car window and yell out, “Nice arse mate!” honking your horn repeatedly. As the boy turns and sees your car, he blushes red in the face. You and your friends laugh hysterically, and shout out the window again, asking for his number this time. And you’re ignored. Again. As you drive past, you all make sexual gestures at him…

Hard to imagine, isn’t it?

There are misconceptions about Public Sexual Harassment too. And largely, as women, you grow out of these but as a young girl, you’re led to believe that this kind of behaviour is actually a compliment (men tell us this, by the way). And to those men, I’d like to say a big ‘fuck you’ because it’s not a compliment. It’s you instead trying to assert your dominance over us. It’s unwarranted, and we do not feel desired. Instead, we feel anxious, shocked and sexualised. Vulnerable even, because your next move is unpredictable – hell, it’s because you’re a stranger and we have no fucking clue what you’re capable of. The whole experience is uncomfortable. And please, girls, whatever you do, do not place judgement on yourself. This is not your fault because you chose to step foot outside or wear that particular skirt – it’s them, and you have every single right to feel and be safe in public, so that’s what needs to change, not you or your behaviour, despite everything you’ve been programmed to believe.

This article isn’t going to belittle or ignore the realities of Public Sexual Harassment. Instead, I want to talk about it. So I did, with some of my closest girl friends and I asked them what their experiences were like with Public Sexual Harassment. What’s shocking is how every single person I asked had something to say. Keeping their names anonymous, I’m going to share these real-life examples on Girls Talk because it is important to talk about it. For it changes the way we live, we make small adjustments to our day-to-day life for the sake of men who harass us in public – and don’t underestimate how exhausting that is. We avoid walking alone at night and playing music too loud through our headphones; we think twice about what we wear, we cross the road if we see a group of men ahead, we’re nervous to walk down alleyways, we check to see who’s walking behind us, we change our route based on street lighting and always text a friend to confirm that we’re home “safe”. There are so many changes we make, and below are a list of reasons for why we do it:

“It was the summer holidays and I was walking into town. I passed by a man (who was topless) and heading in the opposite direction. He wouldn’t stop staring at me and when I got to the top of the road, I realised he had turned round and was following me. I crossed over and so did he. I sped up my pace and he continued to follow. Further ahead, I saw a different man and the one who had been following me, stopped, and ran off a different way.”

“I was walking to work, dressed in my uniform, and a man pulled up beside me in his car. He wound down his window and said, ‘Get in love. I’ll show you some fun!’.”

“It was late at night and I was leaving a restaurant, I walked towards my car and unlocked it. Out of nowhere, a man came up behind me far too close, and I quickly got into my car and drove off. I didn’t even put my seatbelt on, and actually drove off the wrong way through a one-way system. I was so scared.”

“Every Friday on the way to school, a van would beep his horn at me and my friend until he got to the end of the road.”

“I was in a nightclub, and some random guy came up to me and grabbed my boob. I asked him what the hell he was doing, and he just looked at me blankly and walked off.”

“Every single time I go out for a run, I’m honked at by someone.”

“It was summer and I was sunbathing in my garden. Two builders were working on my neighbours house, and they could see into my garden. They kept calling after me and making inappropriate comments, and then one of them started gesticulating and dry-humping the air.”

“I was walking in the street at night and a man came up to me and grabbed me by my arm.”

“A very drunk man sat next to me on a train journey, he wouldn’t stop talking to me and asking for my number. I felt so anxious. I asked him to move and he got really defensive, and aggressive. I didn’t know what else to do, so I just got off the train early.”

“I rejected a guy in a club, and he threw his drink in my face.”

“Every morning on the way to work I had to walk past some builders, and they always told me to smile or would wolf whistle at me. I ended up crossing the road or putting my headphones in to avoid the comments.”

“It was 5am and I was walking home alone after a night shift. Two drunk men started following me home, and were shouting after me, ‘How much do you charge?’ and ‘let’s get your money’s worth!’. I started running home but they were chasing me. Even long after I got back, I just didn’t feel safe. They knew where I lived.”

These are just a select few examples of Public Sexual Harassment, from no more than 10 different girls. From being shouted at in the street to having your body groped in a club, I wonder how much safer we’d feel if we could just say out loud, ‘You know that’s illegal?’ and report it to the police. The fear would still be there, but at least we’d have an element of protection. Our Streets Now is a campaign demanding an end to Public Sexual Harassment, since 94% of us believe that sexual harrassment in public should be a criminal offence, let’s not wait for these men to change, let’s action the change ourselves. 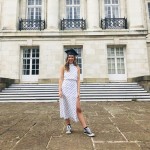 I love to write about taboo things and drink bucket-loads of tea – Yorkshire tea, that is.