The empowering growth of the internet has created a pathway for politics to use social media strategies. Social media has changed the approach of political communication and politicians and political parties are opting for social media for new wat of connecting with voters. Various marketing approaches and their characteristics are connected with political campaigning and the challenges are focused. Social media has a significant impact on the elections relating to the number of people involved and the speed of communication. For example, in 2008, Barack Obama, the United States president used social media successfully for his campaign since he understood social media and leveraged them, and it was the initial campaign where social media was persuasive. We also remember that political period with a historical event. In fact, CNN and YouTube presented the “Presidential debates”. A series of televised debates sponsored by CNN and YouTube in which the 2008 United States presidential election hopefuls fielded questions submitted through YouTube. It was the first series of political debates broadcasted on social media with the interaction of voters.

Nowadays we can see how politicians try to create interesting posts about their political activities, plans, and manifestos. They want to engage followers through a similar strategy used by brands or media companies. Moreover, social media have restricted the distance between a politician and a voter. The first one can communicate with the second one in many ways in order to create a relationship that had never existed before. It’s not easy to create this kind of connection but there are some key points where a politician has to make all of his/her effort to obtain as many votes as he/she can.

Barack Obama, former US President, was the first politician who understood the importance and the power of social media in political campaigning. Also his rival, Donald J. Trump got the centrality of social networks. In 2012, about two in five Americans reported using social media for political purposes, and about one in three said they had encountered messages on social media promoting one of the candidates in the months leading up to the elections but what they may not realize is that news they get is heavily filtered. This has radically changed with Donald Trump’s campaign and the elections in 2016. Politicians all around the globe started using social media, in a serious and more professional way. “Obama ‘invented’ Political Marketing on Social Media but Trump improved it”. But the 2016 United States Presidential Election was an example in which social media was used by the state actor Russia to influence public opinion. Tactics such as propaganda, trolling, and bots were used to leak fake news stories. Studies have found that pro-Trump news was many as four-time more than pro-Clinton fake news. Social Media can be useful for both parts but also to influence negatively public opinion, as we saw before.

The role they played in a political campaign is crucial, especially now with over 1 billion users around all of this platform in 2018. Technological communication and social media in the world can lead to political, economic, and social conflict due to its unmonitored system, cheap interface, and accessibility. Many scholars have studied the role of social media and its effect on democracy. The world of social media is more conducive to the extreme, emotionally charged, and divisive types of content that it is to calm, principled considerations of competing or complex narratives. So, the role that social media assume in a democratic world is quite complex.

In history, we have a case of study related to the Arab Spring where social media helped the process of democratization in Egypt. During the peak of the Egyptian Revolution of 2011, the internet and social media played a huge role in facilitating information. At that time, Hosni Mubarak was the president of Egypt and head the regime for almost 30 years. Mubarak was to threaten by the immense power that the internet and social media gave the people the government successfully shut down the Internet, using the Ramses Exchange, for a period of time in February 2011. Egyptians used Facebook, Twitter, and YouTube as a means to communicate and organize demonstrations and rallies to overthrow President Hosni Mubarak, Statistics show that during this time the rate of Tweet from Egypt increased from 2.300 to 230.000 per day and the top 23 protest videos had approximately 5.5 million views.

But social media play an important role not only in a process of democratization but also for disinformation. Though fake news can generate some utility for consumers, in terms of confirming extremes beliefs and spreading propaganda in favor of a presidential candidate, as we saw for Donald Trump in 2016 with the interference of Russia. The marginal cost of fake news is exponential, as the first article is shared it can affect a small number of people, but as the article spreads is widely more throughout Facebook, the negative externality multiplies.

Social media are public platforms so anyone, as we have seen before with the process of democratization, people can essentially post anything without being accountable for fact-checking. Users have to identify and distinguish between misinformation and disinformation, and real news. It’s common for voters to having problems with sources and the real truth behind political facts. Often electoral teams and politicians use mass communication tools to persuade people in order to create wrong thoughts and opinions without solids basis. We have to pay attention to what we read, discuss, and say if we want to be aware of people. 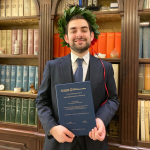